Sister Mary Angela Bodnar, F.D.C., a faithful   Daughter of   Divine Charity for 68 years, passed away peacefully into the arms of her Lord on January 30, 2017, at St. Joseph Hill Convent. 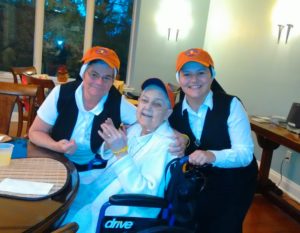 She was born on September 3, 1929, in Bridgeport, Connecticut to Bertalan and Elizabeth Bartok Bodnar.

She attended St. Stephen’s     grammar school where she was enamored with the teaching nuns and entered their order as a postulant after completing the 7th grade. She completed elementary and high school at St. Joseph Hill Academy and entered the novitiate on July 2,1947. She professed her vows on July 4, 1949.
Sister Angela earned a bachelor’s degree in education from Seton Hall University and taught in parish elementary schools in New York, New Jersey, and Pennsylvania. After 25 years of   teaching grades 2 through 6, she achieved her lifelong dream of becoming a cook and for six years cooked and baked for her Sisters at Villa Madonna, the province         infirmary and retirement home in Allamuchy, N.J. During those years, she also spent two days a week teaching at the Villa Madonna Nursery School.
Sister Angela was also a school  librarian, the provincial secretary,  assisted at a shelter for homeless women, administrator at Edna McLaughin, a home for elderly women, the superior at St. Joseph Convent, and an administrator at Villa Madonna. Sister worked tirelessly until 2004 when she suffered a stroke and was forced to retire.

Sister Angela was kind and caring. She lived her life full of fun, her dogs, and the children she taught.

Her family, friends, and Sisters celebrated her life on February 1st according to Sister Angela’s meticulously thought out instructions meant to ease the burden of her loss.