The purpose of the visit to the former home of the Sisters at Allamuchy, New Jersey was twofold.  Rutherfurd Hall, the landmark home of the Rutherfurd family, was given to the Daughters of Divine    Charity in the early 1950s.  Shortly after acquiring the property the Sisters named the house Villa Madonna in honor of the Blessed Virgin, converted the billiard room to a chapel and built a state-of-the-art infirmary for their  elderly members.

In 1955, the first of many novice groups came to Villa Madonna to spend the year in prayer and in   learning about the vocation to which God had called them.  About 10 years ago, due to the sharp decline in the number of Sisters, the property was sold to the Allamuchy school district which converted the         infirmary to a primary school.  The county kept the original mansion intact because of its historic value and renamed it Rutherfurd Hall.

In June, Guy Rutherfurd and his cousin Winthop contacted the     Sisters and invited them to attend the celebration of the fifth  anniversary of Rutherfurd Hall.   Sisters William and Regina enjoyed a trip down memory lane as they toured the house, school and Rutherfurd cemetery plot.  Sister William, one of the first Sisters to live at Villa Madonna, provided the tour guide with a few interesting  tidbits about the location of the   former gun closet and the ball gown hangers. She also shared the history of who occupied 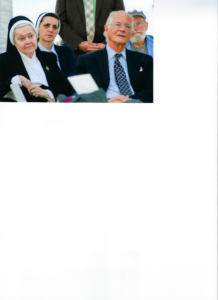 certain rooms when it was a home to the Rutherfurds.

Mr. Rutherfurd was  intent on having more   Sisters return to Allamuchy to visit.  In an incredibly generous gesture he arranged van transportation on August 28th  from the Sisters’ home in Staten Island to Rutherfurd Hall.

The Sisters spent the day touring their former home, being treated to a lovely lunch on the grounds and recalling many stories from their days there when they were young novices.

While the Sisters have left the property in New Jersey, they cherish the years they spent in this historical site—home to so many of their favorite memories.